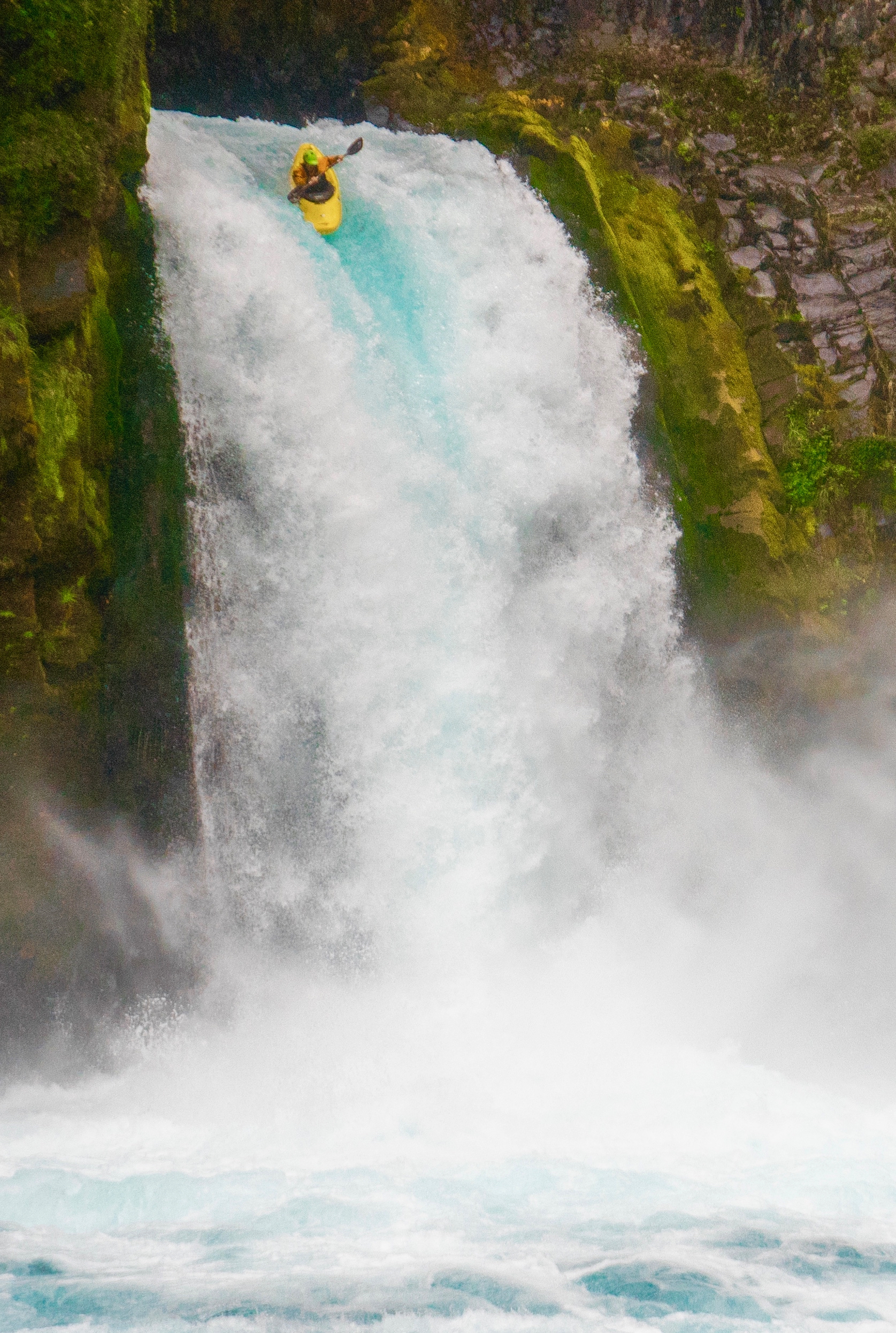 Kayak the world’s cleanest 50-foot waterfall within Chile’s Middle Fuy basalt canyon. Expert kayakers are guaranteed waterfalls, creeking, and river running experiences in both the Fuy and Pucon Valleys. Because the Middle Fuy’s glacial melt is dangerously high during early season, FEB guarantees the perfect manageable low-water levels safe for the Middle canyon. This Pucon Chile kayak trip starts with a river running warmer upper to hone your boof and waterfall skills in Pucon. Then you will kayak 3 days/2 nights at our Middle Fuy base.  Choose from cabin or camping option. 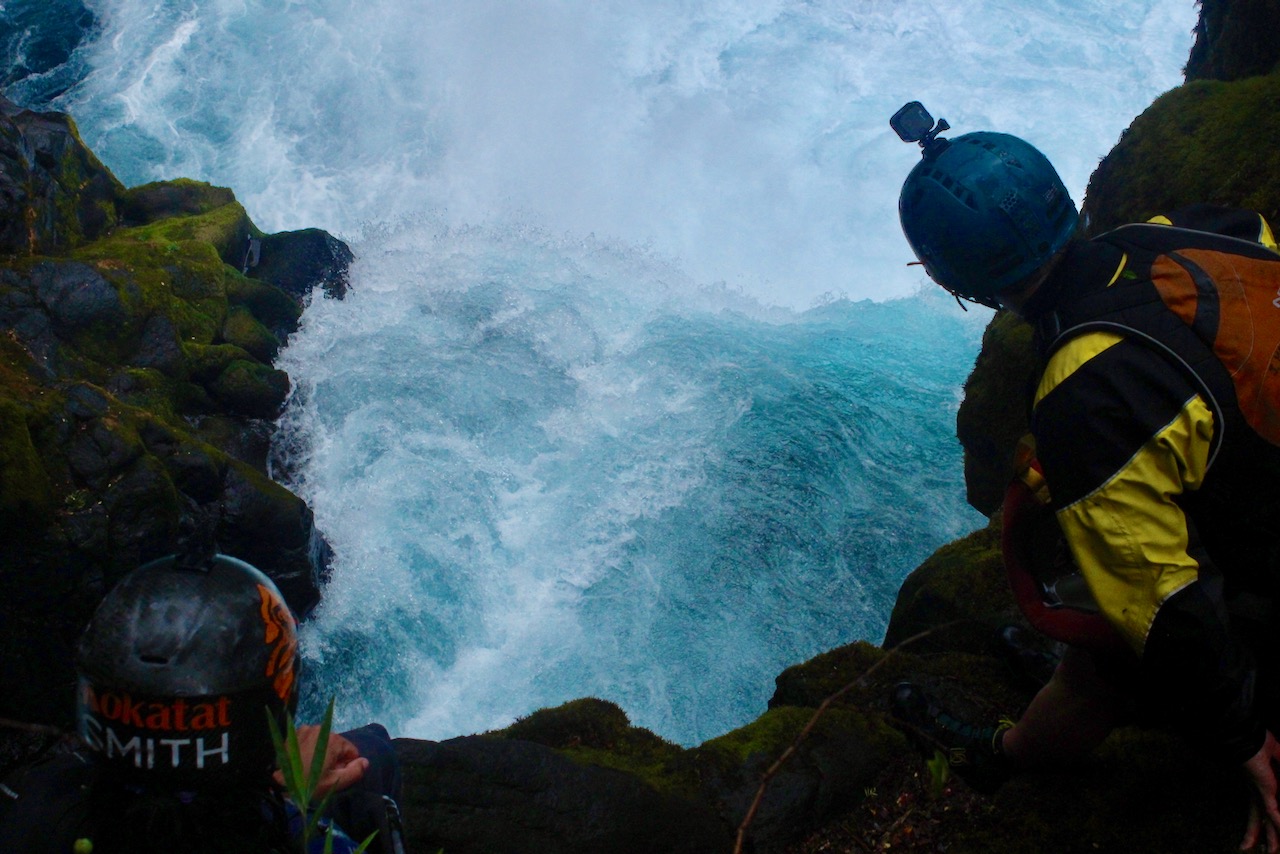 Last scout above the 50 footer. 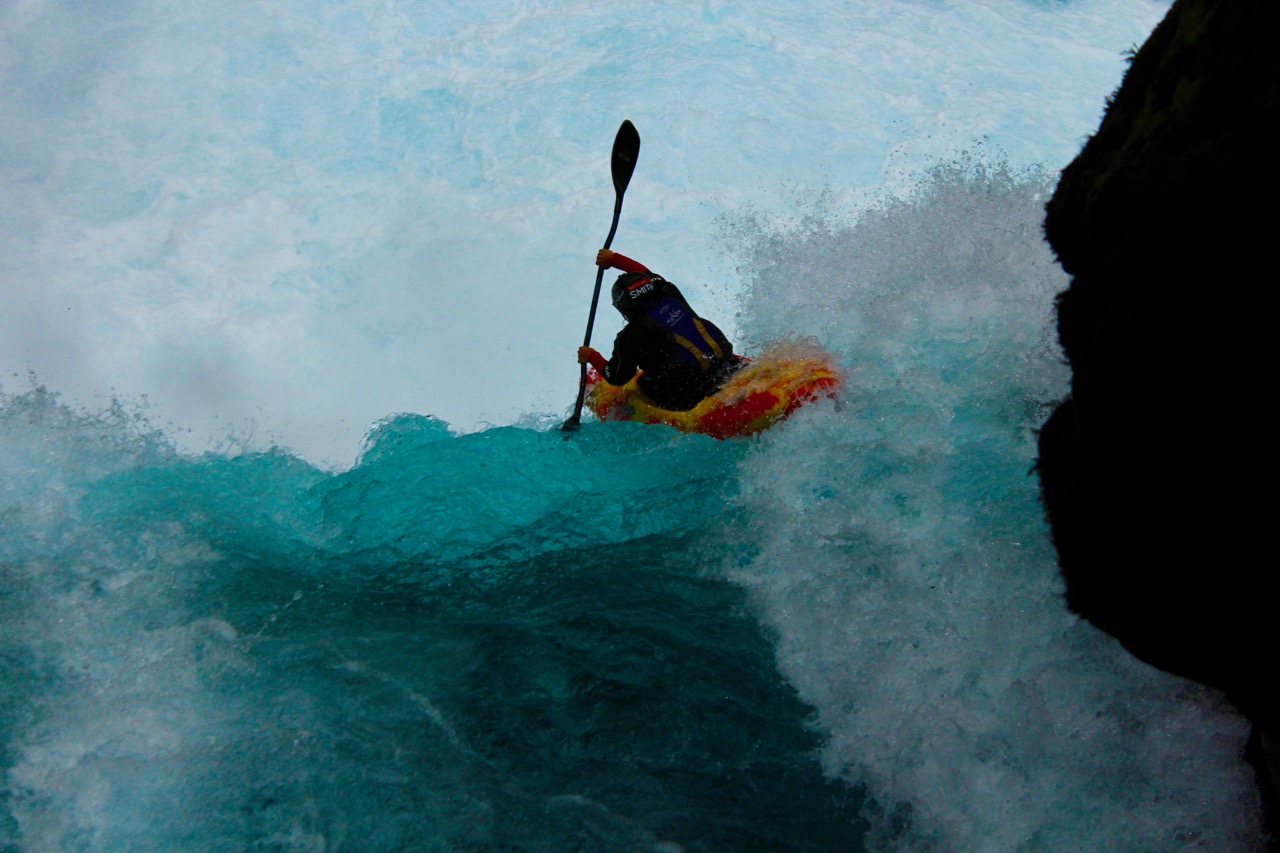 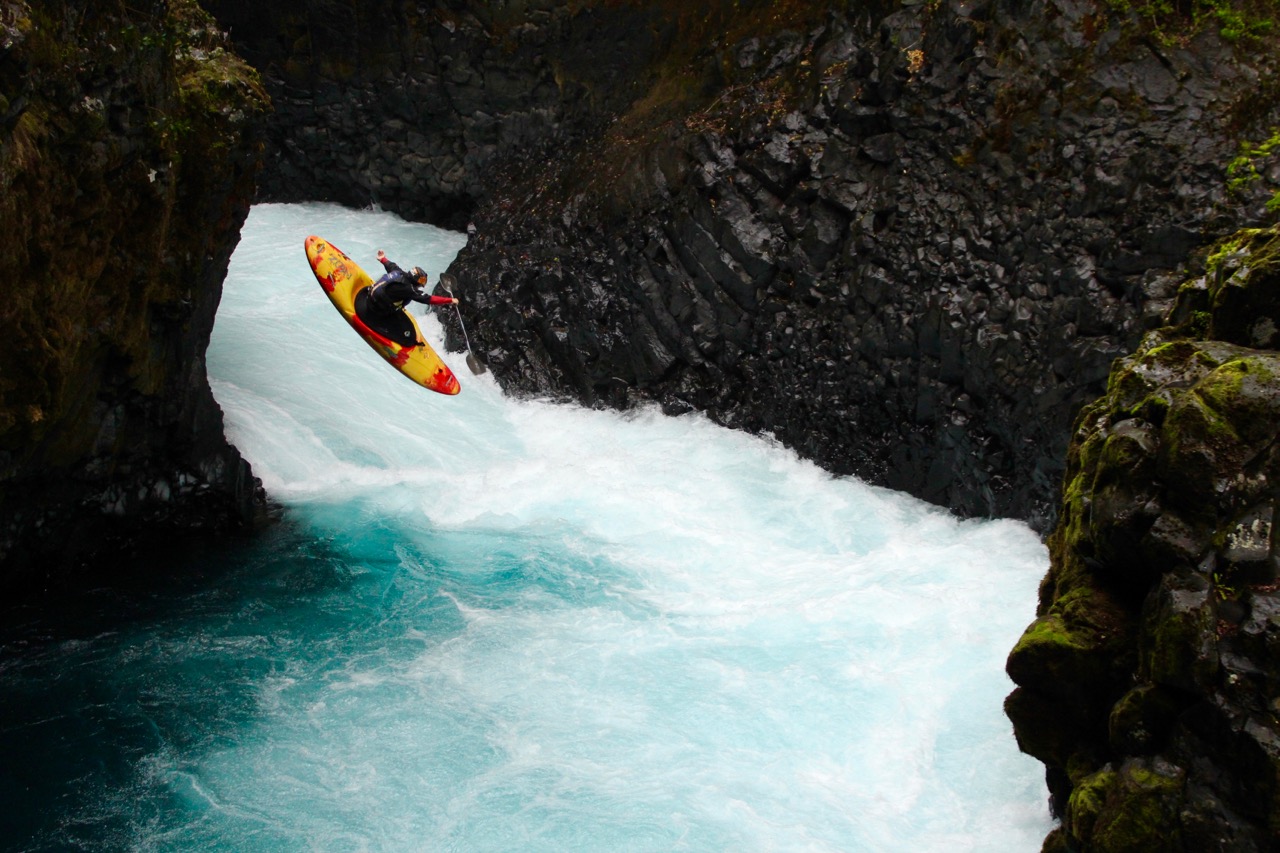 Kalob seal launches into the eddy above 50 footer.

Is this the world’s cleanest 50 footer? Look at the eddy size. 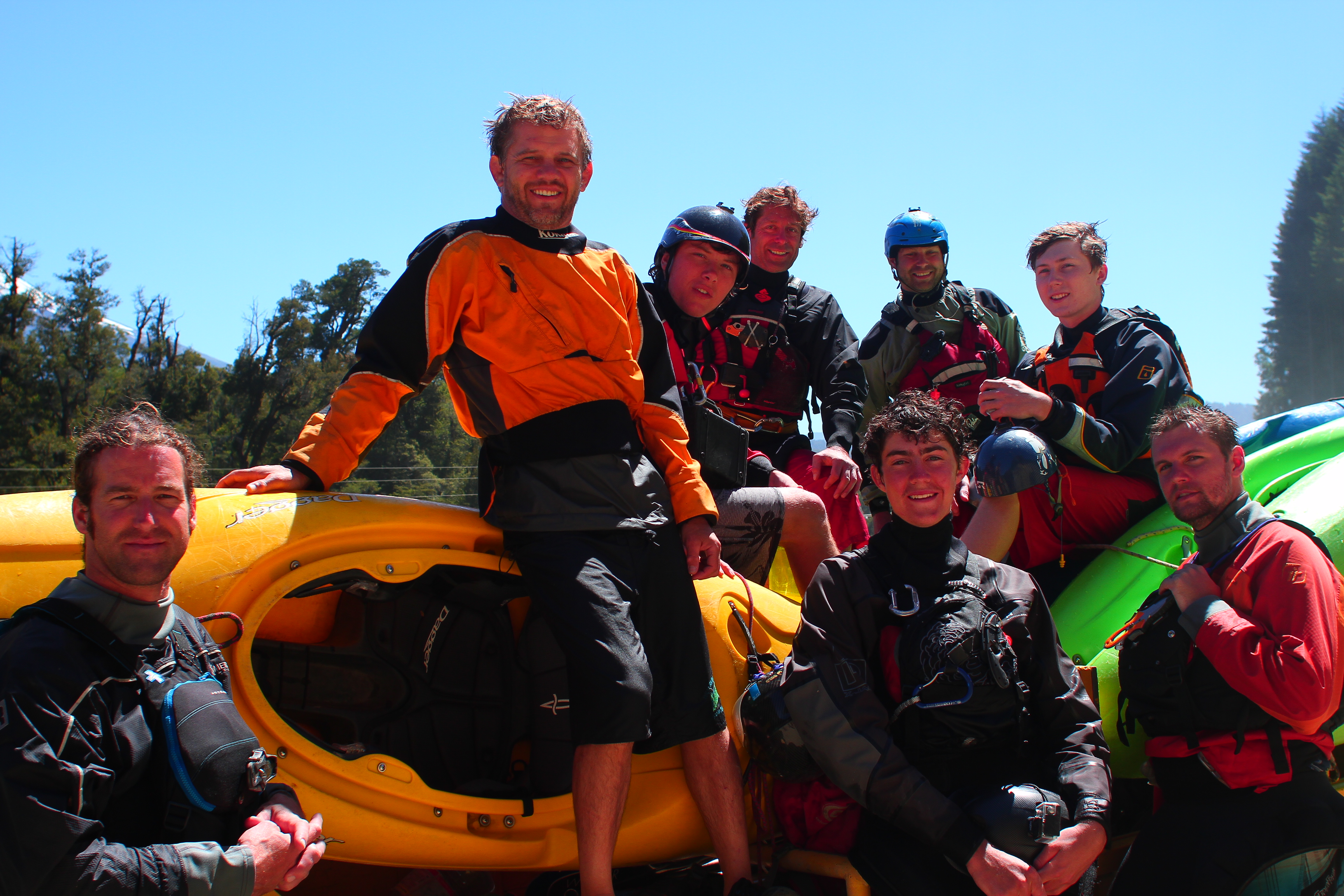 That joy after you’ve just ran the Middle Fuy with your crew. 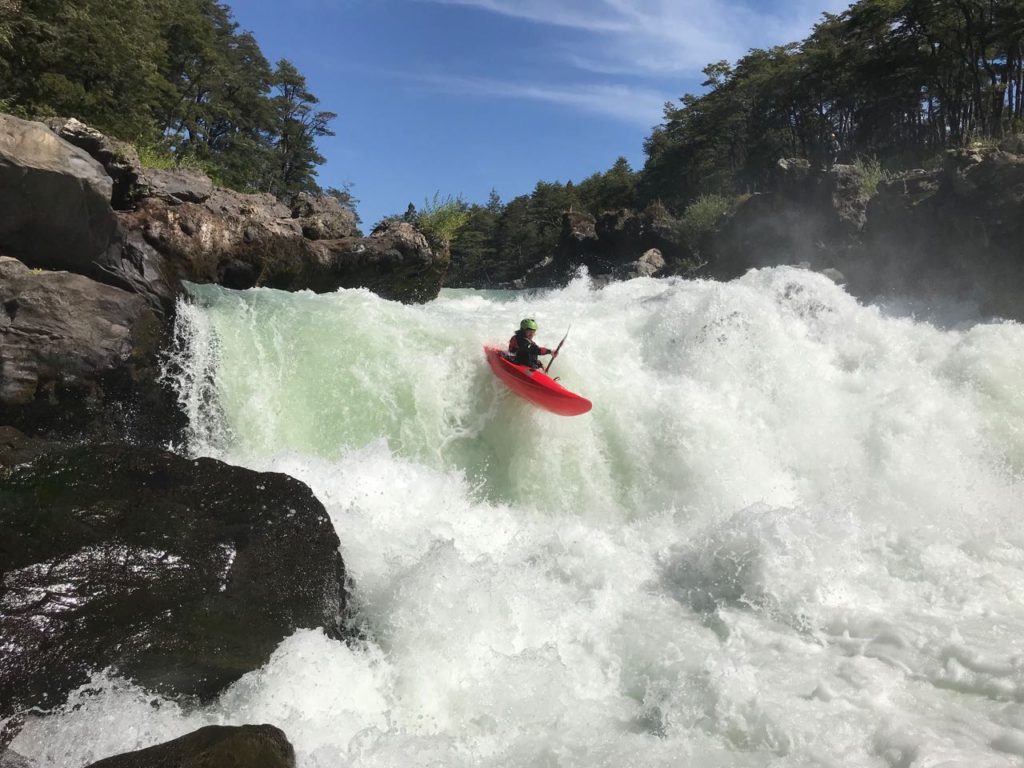 Do you want a piece of Marimon? Backyard Trancura big-bird.

Notching a clean 50 footer for many is the whitewater achievement of a lifetime. It’s intimidating, exciting, and thrilling all at the same time. The Middle Fuy Canyon begins in the spectacular Huilo Huilo Park at the base of the world famous Salto La Puma. The section above the 50 footer is packed full of class III to IV boofs and creeking, and takes the edge off of the run. After portaging the rapid series above the 50 footer, you’ll scout your line and the team will review media and safety protocol. The approach is in a left bend, the river has a large rolling tongue that lands on a soft pillow of foam with a giant eddy for rescue. We’ve seen swims and broken paddles. With a proper tuck this drop is safer than the photos make it look. There are two approaches we recommend and numerous methods to protect your body and style the drop. This will be cause for discussion and instruction all week. There is a rigorous hike in/out option.

The section below the 50 footer picks up its pace to solid class V. Which is loved by core creekers and river runners. This section is absolutely stunning, and fast paced. Lots of boofs and too many holes and pour overs to mention. Bring your A Game.

Is the Middle Fuy safe?

Local expert kayakers understand there is a huge difference between high and low Fuy levels. High Fuy levels are BIG. By late February Lago Neltume no longer supplies water to the Upper Fuy canyon. While, the warm water Upper Fuy becomes bone dry the Middle Fuy maintains a cold water flow from two glacial creek feeders. The reduced flow is a game changer making for playful late season low-water Middle Fuy levels. It’s awesome as eddies, boofs, and pour overs transition from terrifying to fun. The rapids are still fast but now have breather eddies and pools. And of course, the +PLUS is the 50 footer is the kayaker ride of a lifetime worth celebrating.

Will we kayak Chile’s Upper Fuy (III to IV+)?

About the Fuy Area

It’s like a real-world Ewok fantasy land. We’re serious, the tree hotel is nothing short of a giant Ewok architected hotel. Every advanced kayaker that comes to Pucon makes the day trip to the Rio Fuy. But few realize to stay multiple day, and just how great the short lived Rio Fuy is. Lago Neltume is a narrow lake collecting annual glacial melt guaranteeing even the lowest of water levels class III to IV creeking. Within 12 miles the Fuy makes it’s way through a handful of canyons and three river sections before it drains into Lago Neltume.

We’ll warm up with our local Pucon runs primarily on the Trancura and Palguin sections. We’ll mix Upper Trancura, Upper Palguin, and other local river laps as a warmer upper for your Fuy road trip.